A VERY HAPPY CHRISTMAS TO EVERYONE! 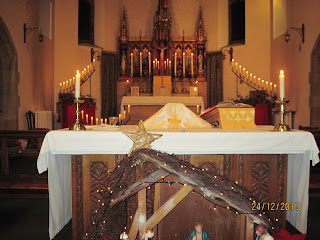 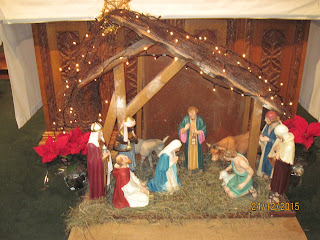 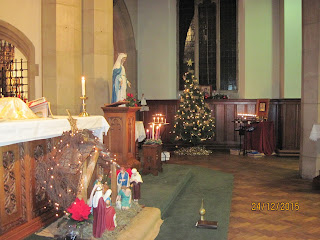 (Of course, the Baby Jesus didn't arrive until the Crib was blessed
shortly after I photographed the Crib)
Posted by The Welkin at 15:25 No comments: 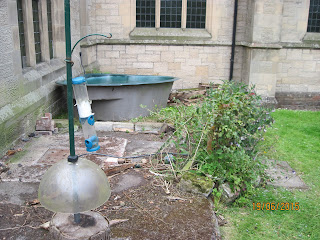 A couple of days ago, I got around to doing what I had intended to do since last year -  to empty and dismantle the fish tank. I transferred four fish ( three gold fish and one whose name I forget) to the main pond - they are all swimming happily together. I asked my electrician to come and sort out the eletrics. Which he did, and then he set forth to dismantle the tank, as you can see. I think we were just in time to take it apart - the wooden supports were mostly mush, and the whole thing was in grave danger of collapsing.  We discussed selling the tank on Ebay, with some other equipment.  Fish tank, anyone?

After the job wasd done, he asked about my latest dog Prince. I took him to meet the dog, and he was immediatey impressed; he said "There's no badness in him at all" (Ican only hope that is right). He also explained some of the stroking habits which I had picked up because the dog obviously liked them, telling me that stroking his head was the usual rpreamble to calm the racing dog before putting him into the trap at the beginning of the race.  Looking into his ears, he pointed out tattoos in each ear, one he said would be the dog's racing name and the other would be the owners' initials. When I can confirm the tattoos I hope to be able to find him on the internet and I would love to see if he had won any races.
Posted by The Welkin at 17:47 4 comments: 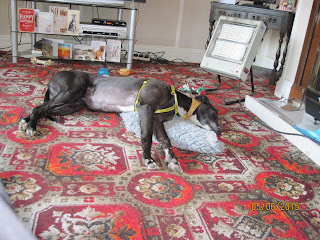 I'm at home and at peace.

......though I suppose My Master will be getting out of His chair pretty soon, and then I will have to get up as well.  I need to follow Him wherever He goes, 'cos I think He is older than me (something to do with those cards with numbers on, which I don't understand) and I have to check that He does not find Himself in difficulties, nor that He is going to run away and leave me alone.  I don't run after Him too much now, because I can guess sometimes what He is going to do next - I have learnt quite a bit since I came here a few weeks ago. Of course I like all the people that I meet here in this place, but I still feel funny about some of the other four legged creatures I meet, and My Master drags me away from them.  Pity!
I call Him My Master, but we all know who is the real master in this house, don't we, but I have decided that it is probably a good thing to let Him go on thinking He's The Boss
Posted by The Welkin at 16:00 1 comment: 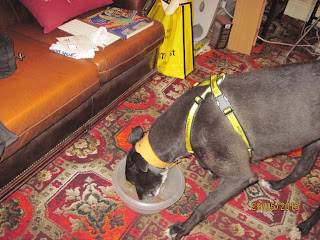 Breakfast....after our early morning walk around the streets of Barnie. 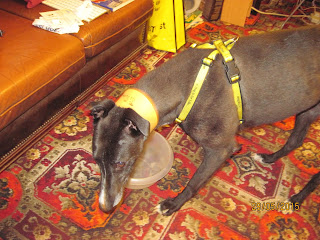 A satisfied Prince...at least for the moment.


Our midday walk around the Mains was interrupted by rain. I stopped to offer Prince the chance to go back home - my dog Storm would have taken the offer, but Prince is made of sterner stuff (being younger and dafter), and wanted to continue - we got drenched by the storm.

I now realise that he walks very well on the lead, having obviously been trained to do so; no doubt his racing owners would have walked him every day. The only time he pulls is when he wants to examine something off to the right or left; I always go with him, because I have little choice - he's very strong! I am still not sure whether he likes other dogs - he had a barking match with two nice looking dogs yesterday. So he stays on the lead until I can be sure.
Posted by The Welkin at 18:51 2 comments:

Just when I thought I was making progress.......

Item # One:  I think that I mentioned once before that Prince is a sort of Hungry Horace Dustbin On Four Long Legs. Yesterday he finished off a saucerful of pink grapefruit, which I had left easily available; I left them because I do not care for pink grapefruit, but I have never known any of my dogs to be interested in soft fruit either. I know he wasn't really hungry, because he is getting used to eating his meals at times which suit me in the way that I have always fed my dogs.  And he had just wolfed his lunch.
Item # Two:  I had thought (too much thinking) that he was getting used to the idea that if I went out he had begun to realise that I would return. Yesterday I was out for two hours in the early evening, to say Evening Mass in Middleton-in-Teesdale, and when I returned his excitement that I had actually come back was ecstatic, not to say positively dangerous, with him leaping, bouncing, twirling about, crashing into things (and me).  Still some way to go there then!

One morning we walked through Waterloo Yard into the Market, and after a long look around I managed to take this photo of the Market Cross, also called the ButterMarket. 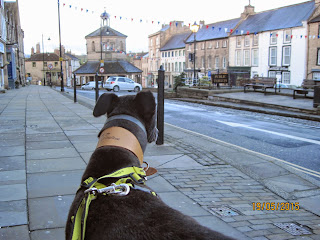 The Butter Market was built in the eighteenth century for the burghers of Barnard Castle to discuss sales and strategy, but now serves as a roundabout to test the driving capabilities of the HGV drivers who have to go round it. Most of them succeed, without damage to their lorries or to the Butter Market.

Otherwise, Prince and I are still good friends.
Posted by The Welkin at 19:10 2 comments:

Another early morning walk around Bowes Museum, to give Prince a good idea of where he lives. He is certainly very happy in my house and around the grounds, in particular he is trying to find the wild rabbit which has taken up residence in my garden (However I noticed a dead rabbit slain by car or lorry on the pavement below the garden - I think it may be 'my' rabbit, so it may be too late to search for it).

At lunchtime I took him for a walk around the Desmesnes (locally the Mains) again on a familiarisation walk.  The Desmesnes is a huge stretch of land, donated by the Lord of the Manor centuries ago to the people of Barnard Castle in perpetuity - you can still see evidence of the strip-farming which took place here, though now it is a wide open space loved by dog-walkers and pedestrians alike where developement is not permitted.  We were approached by a lady, my church organist, with her two dogs on leads (as was mine) and a barking match took place. Her dog barked first but Prince retaliated and barked last.  My ears are still ringing with the noise!  When however we were immediaely approached by a litle black puppy which submissively lay on its back, Prince who was still excited by the barking match made a lunge for the puppy - whether as a play or perhaps something more sinister I was not quite sure.  I dragged him off, and no harm done, but either way the action made me think, and Prince will have to stay on his lead until I am sure.
Posted by The Welkin at 18:42 2 comments: 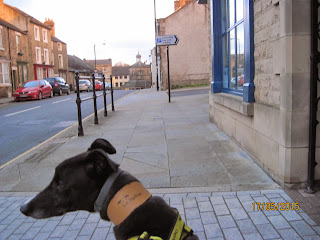 We continue with our orientation walks, very early in the morning today, along Newgate, with the iconic Butter Market (centre in the distance), through the car park and back along Birch Road. I hope to show Prince where he lives so that if he 'escapes' he will know how to get back home again.

I have come to the conclusion that he is a clumsy dog. He bumps into things, whether walking forward or backwards (he does that a lot) and when he has a good shake his legs go in all directions and he can thump anything in range.  I had to come downstairs just after 2.30 am when I heard a great crash, and found that he had dragged a number of electronic devices off a shelf, getting tangled up with the cables and presumably by shaking, and the crash was very noisy. No damage done, and all sorted out in a minute. But whereas my dog Storm lived with those cables for years without pulling on them Prince caused chaos in a couple of days.

He enjoyed the end of my 10.30 Mass this morning.  He found his way into church when some youngsters opened the inter-connecting house door to deliver the collections into the house, and once into the church he approached everybody still there after Mass and received plenty of cuddles and kind words; he was very popular and he knew it and loved it!
Posted by The Welkin at 15:42 2 comments: